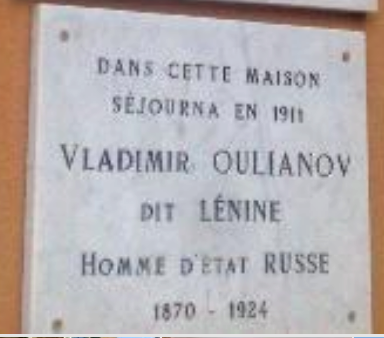 You might know the Vladimir Lenin was a resident in Nice, living here prior to the Russian revolution in 1917, but do you know the fascinating story of his childhood? There were two men, Ilya and Theodore, both educators in a small Russian town, both with fathers of April born sons. Theodore boy was a preschooler, Ilya’s was a teenager and student at the high school were Theodore was principle. It is believed that these two friends had a mutual agreement that if either would die, the other would look after the son of his friend.

One day Ilya passed away and Theodore was named as the boy’s guardian. That son was named Vladimir. At 17, the boy was planning to graduate and Theodore was anxious for the boy to continue his education. He was a good student and had a bright future. But here is where it gets more complicated. Vladimir’s older brother got in a lot of trouble. In fact, he was implicated in a plot to assassinate the Czar. Vladimir had nothing to do with it. Still no credible university would admit the innocent brother of such a criminal. Thus, Vladimir’s hopes were dashed. Almost.

His godfather Theodore got involved and wrote a glowing letter to the administrators of Kazan university explaining that Vladimir was first in all subjects and neither in or out of school by word or deed had he ever once caused his teachers or school authorities to be dissatisfied. That his religious upbringing was apparent. So compelling was the letter that young Vladimir was accepted by the university. But who could imagine what would happen next?

Theodore you recall had a son of his own. His name was Alexsandr. He was 6 years old. Thirty years later, he Alexsandr Kerensky, would become Prime Minister of Russia. It was the Kerensky government that was toppled, in October 1917 by the so-called Bolshevik revolution and that revolution was led by his political enemy, his father’s beloved godson, Vladimir Ilyich Ulyanov, known by his adopted name, Vladimir Lenin.

Join Via Nissa on a tour of Nice through Russian eyes.