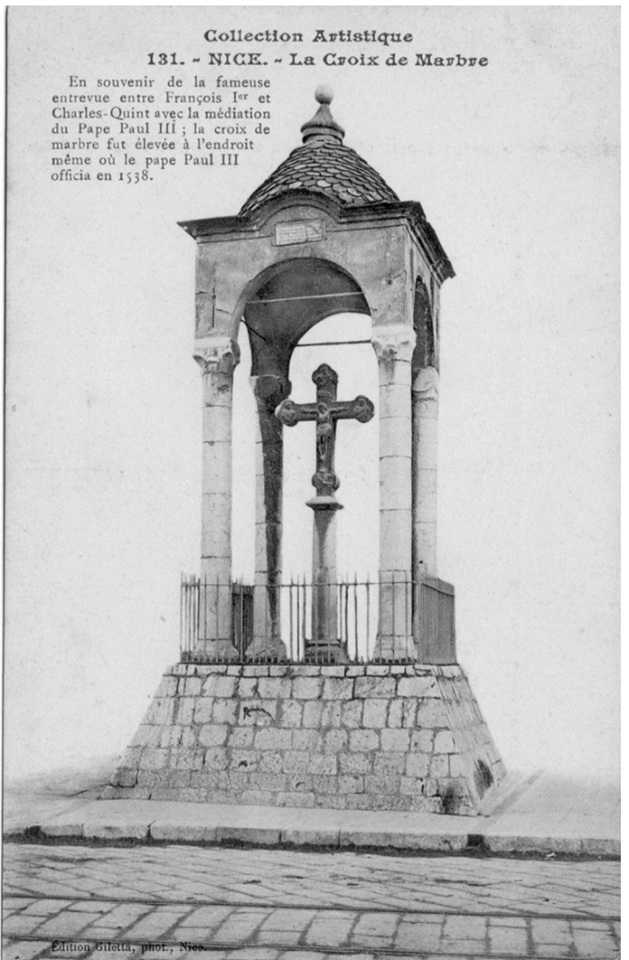 In our American and English tours of Nice we often stop to visit the district of the Croix de Marble, the first neighborhood of Nice which was the home of the English during the 18th and 19th century. But if we go back a little further in history, we find ourselves back in 1431, when ten Niçois nobles were concerned that the Holy Places of Jerusalem could no longer be visited. The last Latin hold in the Holy Land was Acre, lost in 1291. So, the Niçois nobles decided to invite a congregation of Franciscans Observatins to come to Nice. They were given land and built their convent and church at the Croix de Marble (the countryside), which was completed in 1461, far from the protection of the city walls.

The ten nobles who had adorned themselves with the title of confessors of the Holy Sepulcher then decided to become a brotherhood of penitents. The new brotherhood of the Penitents Blues will not stay very long here and will emigrate in 1504 inside the walls of Nice, then its future will be written on the new place Victor (Place Garibaldi today) in April 1784 where it is located now. (Visit the penitents with Via Nissa for an inside look at this medieval institution which is still strong today).

In 1538, an important political event was held in Nice, a mediation by Pope Paul III who wants to try to reconcile once for all the two irreducible adversaries that are Francis I and Charles V. The pontiff, originally wanted to stay at the Castle bit was eventually be welcomed by the Franciscan Fathers of the Cross of Marble.

The pope and his legates shuttle between the two sovereigns who will not meet during this event, all to reach a wobbly agreement, a ten-year peace that will not be respected because in 1543 the war will recommence with the Franco-Turkish headquarters of Nice which will leave indelible traces in the memory of Nice. It was after this attack that Nice relocated the city from the upper area by the chateau to the lower city. This intervention by the Pope is what is memorialized here at the Croix de Marble. The War of 1543 we will save for another day…