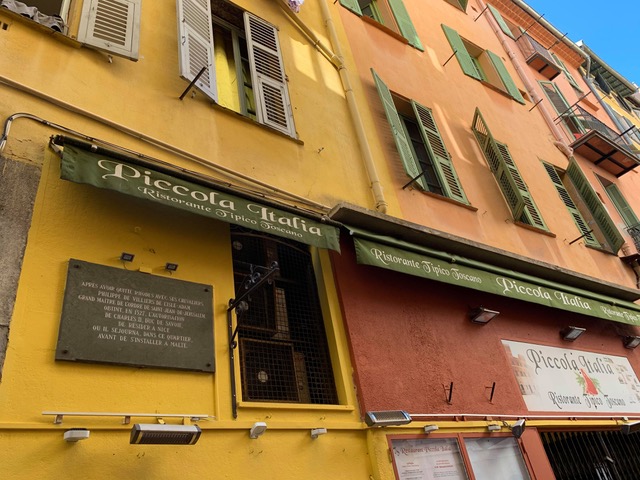 Have you ever noticed this plaque, 7 rue Mascoïnat? Do you know the history that links the Knights of the Order of the Hospitallers and Old Nice? The tragic expulsion of the Jews from Rhodes? Robert Levitt goes back in time… to the 16th century.

In the year 1522, a bloody siege took place of the Island of Rhodes. The Muslim Turks of the Ottoman empire fought and defeated the Knights Hospitallers. On December 22, 1522 the Knights were to be expelled from the island and given twelve days to leave the island with their weapons, and any valuables or religious icons they desired.

Thus began a period of 8 years wandering, which began in Sicily before they finally settled on Malta in 1530. Philippe Villiers de L’Isle-Adam was the Grand Master during this period and from November 13, 1527 until June 14, 1529, the Knights Hospitallers made Nice their headquarters. One reason they may have chosen Nice was because the military commander, Louis dal Pozzo, was Niçois and from the language of Provence. The military order was divided up into languages, such as French, Spanish, and Provençal among others. The voyage to Nice, with a safe passage from the pope, began in Viterbo, the old headquarters of the Hospitallers and eventually driven out by the plague. The voyage to Nice was proceeded by a stop in Villefranche. Here dal Pozzo waited for the Grand Maître for twenty months during which they ordered the construction of several new galleys (ships with oars). The Knights remained in Nice until the ship construction was complete, living in a « magisterial palace, a hospital and inns » and their Grand Master headed to England.

A plaque can be seen in Nice at 7, rue Mascoïnat commemorating their arrival in 1527:

But this wasn’t the first time that former residents of the islands around Rhodes (actually Kos) came to Nice. The Grand Master of the Knights, Cardinal Pierre d’Aubusson ordered the Jews to embrace Christianity and on January 9, 1502, he decreed the expulsion of the Jews from the islands of Rhodes, possible because he suspected a Turkish spy among them, a jewish physician. The Jews of Kos had been living there since before the Christian era, heading their after the fall of Samaria. This was a period not long after the Jews had been expelled from England (1290), Hungary (1348), Spain (1492), Portugal (1497), France (1306, 1383 and 1501), Venice ghetto (1516), Genoa (1516) and they were likely in Rhodes after having been captured at sea by the Knights and other Christian corsairs and held as slaves.

Particularly after the Ottoman conquest of Constantinople in 1453 did the crusading fervor against Jews rise and it certainly wouldn’t have been uncommon to discover cases where the Jews were the allies of the Muslims. This has led some historians to suggest that the Jews were expelled because they could constitute a fifth column for the Turks. Neither was it unusual during the sixteenth century for Jews to arrive in the Duchy of Savoy, as we know that in 1568-70, Jews from forced out of Provence and made their way to the Duchy. With France now controlling much of Provence, and the Jews having being expelled from France, for Jews to come to Nice may have made sense. There weren’t many places for them to go in Europe. They were prohibited from settling in the east as they feared the Jews would become spies for the Muslims. Recall that the expulsion from Spain included all Spanish territories, including the Kingdom of Naples and the Island of Sicily. Much earlier, Nice wasn’t considered so favorable to the Jews, who had been decreed to live in a Jewish ghetto in 1430 and imposed again in 1448. (Much at the instigation of the Dominican St. Vincent Ferrer, 1350-1419). We also can see the anti-Semitic symbolism hidden in the in the murals of Canavesio of 1492 at La Brigue at the Sanctuary Notre Dame of the Fountains. Nice’s history with the Jews was filled with conflicting evidence. On the one hand the Duchy imposed a ghetto, but at the same time, the City of Nice hired as the City’s banker, a Jew with the free right of movement.

In Rhodes, the Jews were given only 40 days to sell all of their possessions and flee the island. Yet what was tragic was that their children were not able to join them. As slaves, their children were considered possessions of the Knights, not their parents. The children were to be taken from them and baptized and placed into Christian homes. Alternative they could choose to convert to Christianity. Some accepted baptism, others preferred death, while still others consented to be sold further into slavery. Before the expulsion decree was fully executed, Pierre d’Aubusson died. Some of those who did not come to Nice then actually did go into the service of the Turks and were instrumental in helping the Turks defeating the Chevaliers in 1522. With the defeat of the Hospitallers, Jews were invited back to the Island of Rhodes and Kos by Suleiman the Magnificent, who ruled the Turks from 1520 until 1566, where they lived in safety until the German invasion in September 1943. We do not yet know if any Jews from Nice returned.