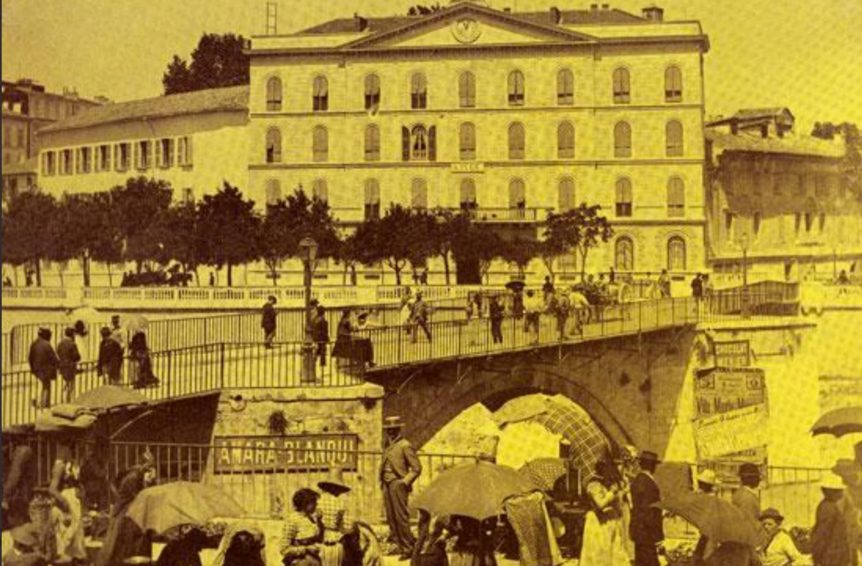 Have you ever noticed the glass covering just at the tramway entrance Opéra? What could it possible show as the glass has become so dirty, nobody can tell. Well, it is the vestige of the former Pont Vieux, written about as early as the year 1250. The bridge was built from stone.

The Paillon River has disappeared from our view, covered over by the beautiful park known as the Coulée Verte. Once called, the Saint-Antoine bridge « Pontem Sancti Antonii », it was the only way to cross the river from the Middle Ages to the beginning of the 19th century when a second bridge was put in at Place Masséna. Saint-Antoine was the protector Saint of contageous deseases, such as the plague.

In the second half of the 13th century a suburb developed on the eastern bank of the river. Saint-Antoine hospital was located there and gave its name to the neighborhood and then to the bridge. On the city side, access to the bridge was blocked by a fortified door, which was closed during periods of instability. We can see in a detailed view of a painting by Louis Bréa a representation of the guardhouse and circular tower. There was a drawbridge. During the War with the French and Turks, the bridge was purposely destroyed to protect the city and rebuilt again in 1545. The bridge was completely destroyed in 1921, which left only our dirty window for posterity.