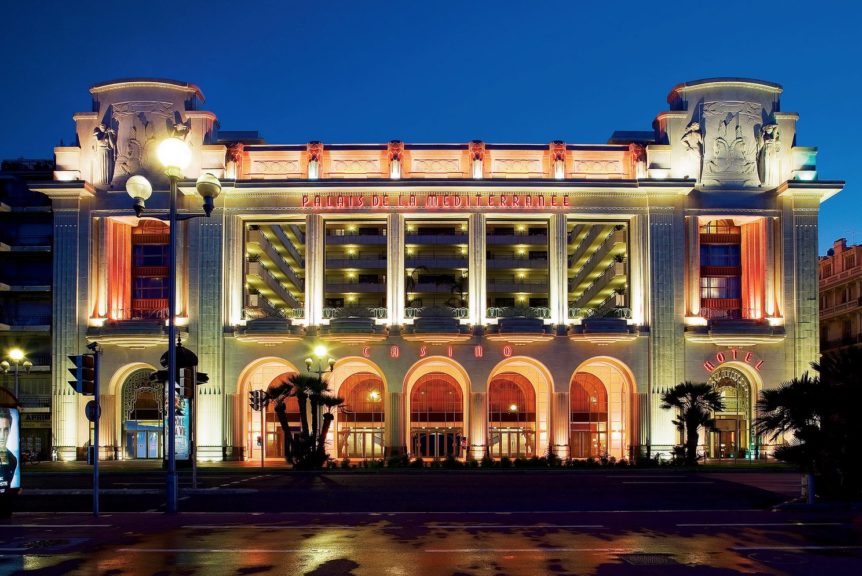 When we think of Casino magnates, we might think of Sheldon Adelson, Steve Wynn or Sol Kerzner, yet the first true casino magnate was likely the American Frank Jay Gould, who built his casinos in Juans-les-Pins and Nice among other places. France had declared gambling legal in 1907 and Gould joined in the excitement to compete with Monte Carlo. He inherited a fortune from his father, said to be a robber baron, and came to the Riviera, which he practically created with other Americans, in 1913. The locals called him the “sad millionaire” because he lived like a monk, rarely leaving his Juans-les-Pins home called Soleil d’Or. His third wife, Florence, was know for introducing water skiing to the Riviera, but was also said to be a Nazi collaborator. As the allies closed-in, she was said to have run a money laundering operation for fleeing Nazis.

This is a photo of the Palais de la Méditerranée Hotel, built at a cost of US$4 million in 1931. It was said to be suicide-proof. Why suicide proof? Because the casinos in Monte Carlo were built on cliffs and many gamblers who left their money on the tables jumped off those cliffs. The casino had tables for 2000 people. Baccarat was very popular and the 40 tables held 600 persons.

Gould would entertain the likes of Zelda and Scott Fitzgerald, Pablo Picasso, Joseph Kennedy, and Charlie Chaplin, who became a lover of Florence.

Join us for an American tour of Nice where we look at the city through Americans eyes.