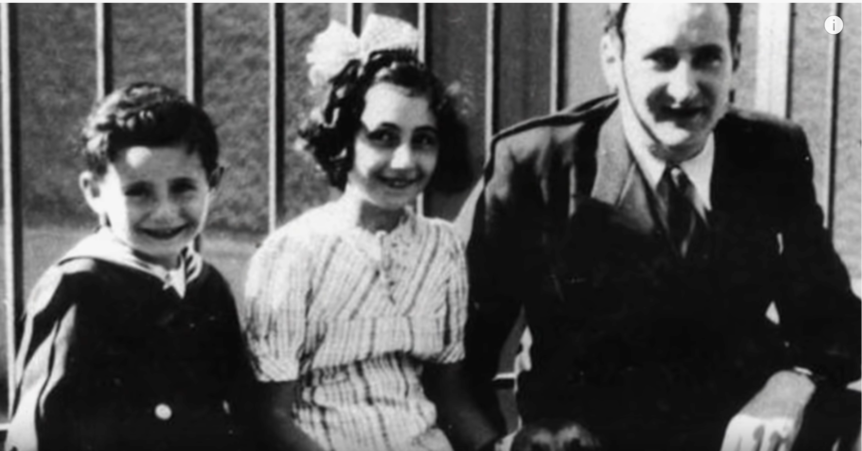 This is the former home of the Klarsfelds (the most successful Nazi hunters in history) which they occupied in Nice on the 30th of September 1943 when the Gestapo, just after midnight, placed its light projectors against the building’s facade and began to systematically search the apartments for Jews they knew were inside. The Germans came to take them away. It was only a few days earlier that the family was walking down the Promenade des Anglais taking photos.

Screams were heard throughout the building and their boots could be heard on the staircase. Serge (8 years old), his sister and Mother hid under a small board covered by a small closet. Their husband and father, Arno, waiting for the Germans and when they asked him where the family was, he told them they had left for the countryside because the apartment was being disinfected. The Gestapo searched the apartment but did not find the family. Arno Klarsfled was taken away never to be seen again. He was first brought to the Hotel Excelsior, then 3 days later by train to Drancy and then Auschwitz on convoi 61, like most of the Jews rounded up in Nice. You can read more about the Roundups in Nice in Jean-Luc Guillet’s book (in French), Rafles, Nice 1942-1944.

Serge Klarsfelds later spent four decades tracking down Nazi war criminals who had resettled around the world, among them Klaus Barbie, who was known as the “Butcher of Lyon.” Barbie was extradited from Bolivia in 1983, several years after the Klarsfelds found him.

Join us on Via Nissa’s Jewish Heritage tour of Nice where we examine Jewish history in Nice from the Medieval period, to WWII, until today.