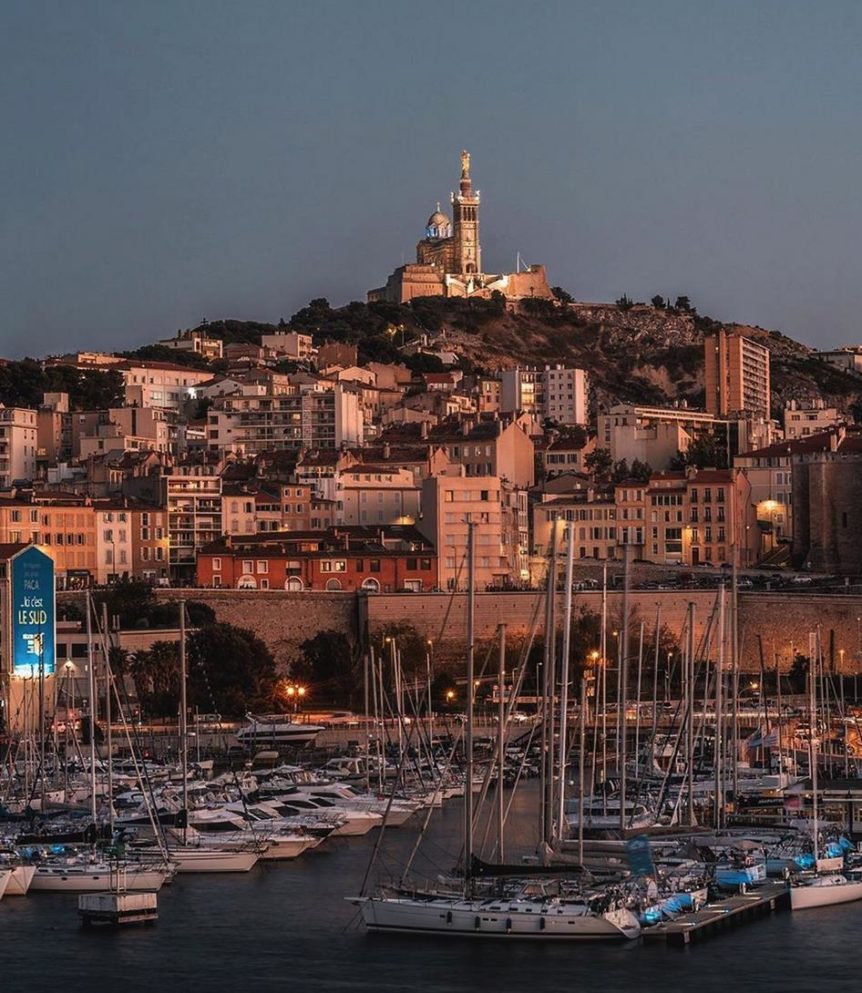 Founded by Greek colonists from Phocaea around 600 BC, Marseille (ancient Massalia) has a long history of Jewish presence dating back 1,000 years.  Today, France’s second largest city is home to about 80,000 Jews, or almost 10% of its population.  This represents one of the largest Jewish populations on the shores of the Mediterranean Sea, outside of Israel, with Marseille being the second-largest Jewish community in France and the third-largest in the whole of Western Europe.

There are 44 synagogues In Marseille that are attended daily by more than 5,000 people.  The oldest and grandest is known as the Grand Synagogue of Marseille (Temple Breteuil which also houses the Jewish consistory).  Opened on September 22, 1864 at the orders of Napoleon III, it is a three-story Sephardi synagogue (with an active, although smaller Ashkenazi chapel) that hosts Shabbat services on Saturdays, followed by Provençal-style Kiddush including green olives, anchovies, and pastis, which is a local anise-based liqueur.  The impressive sanctuary – with the men’s section on the ground floor and the women on the second floor – has shining marble floors, chandeliers, Romanesque arches and jewel-toned stained-glass windows.  Built by the French architect Nathan Saloman, the building has fashionable Oriental motifs.  The emergence of large, purpose-built synagogues were a reflection of the changing socioeconomic and legal status of urban Jews.  It reflects the emergence of public Judaism – that is Judaism which was no longer physically and visually contained.  In the Middle Ages and early modern building, the local authorities who tolerated a Jewish presence in their towns prohibited Jews from constructing conspicuous buildings, as they did not want synagogues to compete with Christian churches.  An organ in the Grand Synagogue reflects a means to expose Jewish “regeneration” and proof of political equality.  It was a reflection of the socio-economic, political, and ideological ambitions of the urban Jewish community.

In June 1940, the Wehrmacht invaded France by land and air.  On June 2nd, the Luftwaffe attacked Marseille.  Over the course of a week, as more bombs fell, and Germany overran Belgium and Holland, refugees poured into Marseille.  After taking Paris on June 14, 1940, Hitler divided France into an occupied zone and a state to the south that became known for its new capital, Vichy.   Marseille remained in the later “free zone” of France from 1940 until November 1942 when following the Allied landing in north Africa, the Germans occupied the city.  Marseille suffered greatly during the WWII, as it was fully exposed to the horrors of the Nazi final solution.  Some 6,000 Jews were arrested on the night of January 23rd, 1943 when the French police completely locked-out the Old Port and began a house-by-house search for Jews over a period of 36 hours.  In 1939, there were 39,000 Jews in Marseille, many of them refuges from Germany and other regions of France.  At the end of WWII, there were only about 10,000 Jews left in Marseille. A large wall, Le mur des noms outside the synagogue commemorates the approximately 2,000 Jews who were deported from the synagogue to Nazi death camps.  This wall includes the name Jules Alexander, whose great-granddaughter, Emmanuelle, will lead Via Nissa’s visit to Jewish Marseille.

The great majority of today’s Jews came to Marseille after WWII.   Following the expulsion of Jews and Muslims from Spain, large numbers of Sephardi Jews went east and south as well as west and north, and reinforced the existing Jewish communities around the Mediterranean basin, bringing with them their own distinctive traditions, intellectual vitality and medieval Spanish dialects.  While Marseille served for a long time as a transit port for Holocaust survivors, vast number of Jews in Marseille came from their post war expulsion from the Arab world, particularly Egypt, Tunisia and Morocco where they had been settled since the fifteenth century.  Many of Marseille’s Jews came as refugees driven from Algeria, where there were 140,000 Jews in 1962 and today there are none (The Algerian Nationality Code of 1963 denied citizenship to all non-Muslims).  In Marseille you will meet Jewish refugees who still suffer the trauma of armed men arriving at their door, and being marched away without explanation and without being able to take their possessions.  As they had been given French citizenship as far back as 1870 (Decree Crémieux), the bulk of these refugees came to France and particularly Marseille, instead of Israel.   They had grown up in the colonial era, an age of comfort and upward Jewish mobility (for affluent families) where Jews dominated literature, culture and sport, excelled in finance and commerce and were liberated from the strictures of dhimmitude.

Among the Righteous among the Nations in Marseille, Gentiles who saved Jews from the Nazis, is Hiram (Harry) Bingham IV, who served as US vice-consul.  Bingham in the 1940s, wanted to draw attention to hunger and disease in the French concentration camps.  He challenged indifference and anti-Semitism among his State Department superiors, and violated both French law and U.S. policy.  In speeding up visa and travel documents at the Marseille consulate, he disobeyed orders from Washington.  In all, an estimated 2,500 refugees were able to flee to safety because of Bingham’s help.  Some of his beneficiaries were famous – Marc Chagall, Jacques Lipchitz, Hannah Arendt, Max Ernst, Lion Feuchtwanger, Heinrich Mann, brother of Thomas Mann  – but most were not.  Bingham accomplished all this in a mere ten months – until the State Department summarily transferred him out of France.  When Bingham’s wife died in 1996, the stories about his service in Marseille remained untold.  Another Righteous among the Nations was Varian Fry, the young American who ran the Emergency Rescue Committee from his room at the Hôtel Splendid.  Fry was given a list of a hundred ‘prominent intellectuals’ whom he was instructed to find and support with American money. In the event, Fry and his brave staff overstepped instructions and set about the wholesale fixing of illegal escapes, often providing the fugitives with fake passports and visas.

Fry’s adversaries were the Vichy authorities, who eventually expelled him in September 1941, and his own government. The US State Department was determined not to offend the Vichy regime (this was before America joined the war), and had a sullenly xenophobic, not to say anti-Semitic, attitude to European refugees begging for visas.  A documentary on Fry was made in 2001 called Varian’s War: The Forgotten Hero.  Gilberto Bosques, the Mexican consul, arranged the escape of many hundreds of Spanish Republicans, survivors of the International Brigades and Jewish civilians.

Via Nissa focuses on four areas during its Marseille visit.  The present Jewish community in Marseille, the city after the Jewish emancipation in the 18th and 19th century, the city during World War II and the displacement from the Arab world which led to the renaissance of Jews in Marseille.   Interestingly, this community began to develop during a period when the city of Marseille began to decline.  Marseille was one of the most important ports in the Mediterranean from the Seventeenth Century until the end of the 1950s.  As a port city, Marseille was the recipient of the benefits of colonization, but with the Independence of former in Colonies in Indochina and North Africa, the dramatically reduced shipping volume together with the significant competition of Barcelona, post Franco, as well as the Italian ports, hit the city’s economy very hard.  This has become worse as modern shipping requires deep water ports which are not available in the city.   Over the past 15 years, however, Marseille has focused on transforming and many physical and economic improvements have occurred and the city has come back to life.

Until the past year, the Jewish community of Marseille has been mostly closed to foreign visitors, fearful of becoming too visible, as there has been an increase in anti-Semitic attitude and violence in France that also has affected the Jewish community of Marseille. The burning of the Or Aviv synagogue in 2002, for example, caused a real shock to the community.  In many cases, Jewish refugees have not wanted to talk about their past experiences.  Today, after decades of silence, Via Nissa is able to take you into Jewish Marseille, its community, its history and its heritage.  This is an intense cultural experience, both a chance to learn and a change to exchange.  You will not only see historic monuments, but you will interact with members of the Marseille community who have first-hand knowledge of the events which occurred.  A full day visit will include a homemade lunch exchange with a family whose Jewish identity was hidden during the Nazi occupation and they did not find out until they reached the age of 18 when the “family secret” was revealed that they were Jewish and not Christian, as they had been raised to believe.  This visit will at a private residence will allow you to also get to see inside a Marseille local life.  We will also meet with those who were expelled from their homes in the Arab world in the 1960s and constructed new lives in France.  The plight of Jewish refugees from Arab lands is central to an understanding of the Arab and Islamist struggle against Israel and Jews, and minorities in general.  Following lunch, you will see the highlights of Marseille.  The Via Nissa Jewish Marseille is an experience you will not likely soon forget.