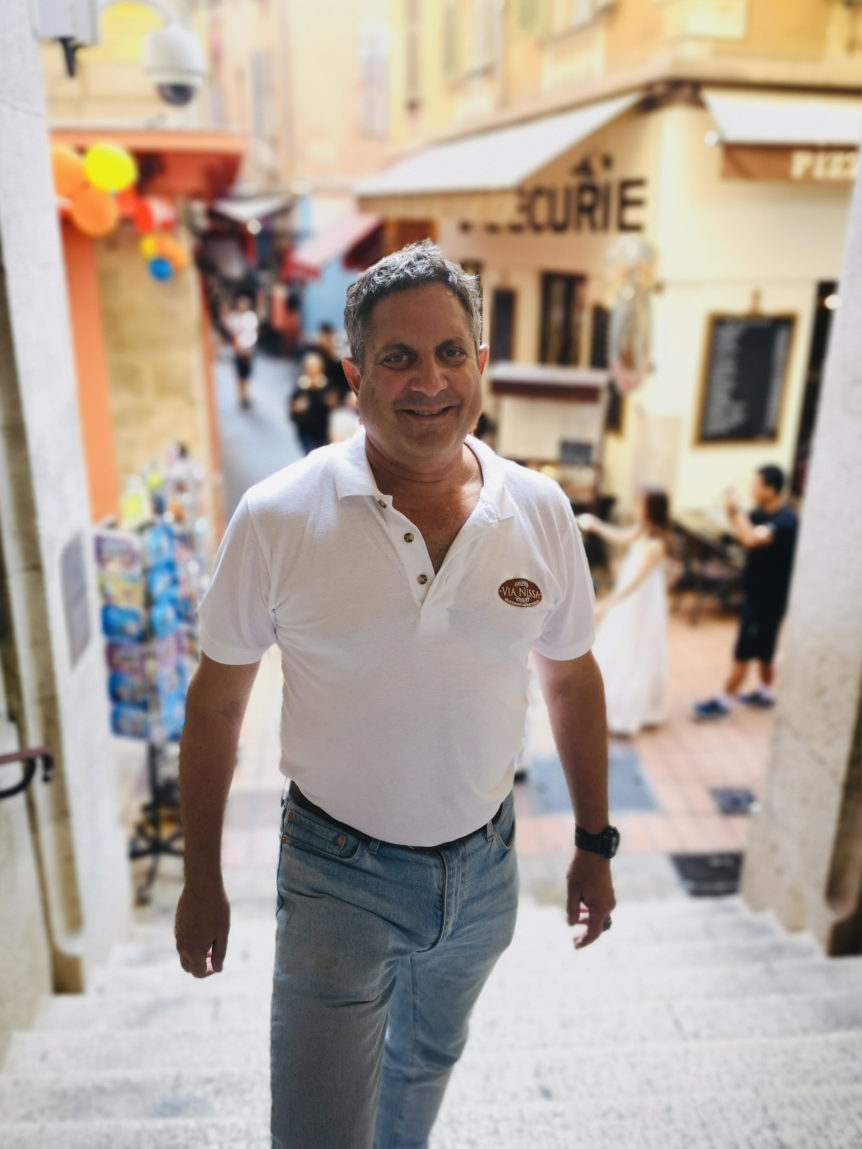 At Via Nissa, Robert Levitt wants to take tourism to another level. The former global hedge fund manager who used to travel the world looking for insight on how the world was adjusting to globalization and investing in it, has planted his roots in the South of France.  Levitt was never a surface traveler, seeking the pleasures of only luxury hotels and restaurants and checking off the “bucket list”.  And he had no interest in traveling a region with a single driver or guide who was the sole window to the culture.  Robert was far more interested in going deep into the heart of a society, and understanding what it was like for those who live there.  In essence, his interest was getting to know an unfamiliar life.

When Levitt came to Nice, he began his cultural descent by studying the language.  We’re not referring to French, but Provençal, the regional language spoken only by those whose families had lived on the Riviera for generations. “The local community had a reputation for being closed to outsiders. But so surprised were the locals that anyone was learning their local language, that I was invited to enter deep into their society.” Robert explained.

Robert continued his inquiry by entering into the local French university, earning the equivalent of a bachelor degree from the université de Nice in Patrimony, which is the study of the regions history, ethnology, religion, literature, art, architecture and culture. His education continued as he completed a research Master’s degree in Medieval history from the université de Lyon and graduating at the top of his class. Now Levitt in addition to running Via Nissa is preparing his doctorate on the geopolitics of the Avignon popes in the fourteenth century, a project which has required him to master both written and spoken Latin.

His concept at Via Nissa was to go well beyond the mundane. “Too many tourists come to the South of France to see the sights, but they rarely have any contact with the people.” He says.  While places around the Côte d’Azur are beautiful, Levitt wanted to introduce his clients into the culture.  He teamed up with archivists, art historians, and linguists to be able to access a civilization.  “We had a client who was interested in a Medieval religious military order where exorcisms are still practiced. We were able to take him into this secret society where the wealth of possessions would make even the Louvre envious and meet and converse with the priests who continued a tradition that dates back to the year 1000.”

Levitt also discovered that there were huge gaps in particular niches that he could fill. One example was Jewish Heritage in Nice, as well as neighboring cities like Marseilles and Genova across the border in Italy. “Nice is one of the most important cities for Jewish Heritage. Not only does it have Medieval ghetto and was the last refuge in Europe for Jews during WWII, but it is fully intact. It was never bombed nor destroyed and the Jewish community remains vibrant,” he explains. But this world was inaccessible for foreign visitors. As a trained historian, Levitt could conduct the archival research to uncover the rich Jewish history in Nice, even discovering carving on the walls under the Medieval ghetto of a Second Temple menorah which was previously unknown.

Yet it is ultimately a renewal of what he refers to as the “Salon Privée” which is the area most ripe for raising the bar on tourism. This concept has long been known on the Riviera, as Nice was the birthplace of tourism. During the 18th through early 20th centuries, it became the winter home to royalty and artists from around Europe. They didn’t come for the beaches or the casinos, but for the opportunity to mingle with other interesting and cultivated people. Levitt brings this concept back today for foreign visitors who are invited to private homes, where meals are cooked by the owners and the guest lists are a selection of those whose culture and interests match those of the visitors. “While lunch or dinner with your traveling companion is always nice, this kind of experience is far more memorable.”